Who, in the public library, one evening after rain,
amongst the polished tables and linoleum,
stands bored under blank light to glance at these pages?
Whose absent mood, like neon glowing in the night,
is conversant with wet pavements, nothing to do?

Neutral, the clock-watching girl stamps out the date,
a forced celebration, a posthumous birthday,
her head buttered by the drizzling library lamps;
yet the accident of words, too, can light the semi-dark
should the reader lead them home, generously journey,
later to return, perhaps leaving a bus ticket as a
bookmark.

Who wrote in margins hieroglyphic notations,
that obscenity, deleted this imperfect line?
Read by whose hostile eyes, in what bed-sitting
rooms,
in which rainy, dejected railway stations?
Posted by MedusaGirl

The illusion of time

Email ThisBlogThis!Share to TwitterShare to FacebookShare to Pinterest
Labels: Painting

The fountains mingle with the river
And the rivers with the ocean;
The winds of heaven mix for ever
With a sweet emotion;
Nothing in the world is single;
All things by a law divine
In one spirit meet and mingle.
Why not I with thine? --

See the mountains kiss high heaven
And the waves clasp one another;
No sister-flower would be forgiven
If it disdained its brother;
And the sunlight clasps the earth
And the moonbeams kiss the sea:
What is all this sweet work worth
If thou kiss not me?
Posted by MedusaGirl

The Soul of a Rose 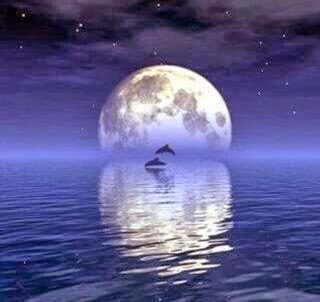 Resting in my palm is a piece of broken shell. My thumb caresses its porcelain underside as my fingers explore its serrated edges. I lose myself in the pattern of shifting storm clouds on its surface. The sky moves in my hand, mirror image of the shifting sky above me.

Bits of shell are burrowed in the sand, their scalloped surface broken again and again by the violent rush of the sea. But now the water is calm like the intaken and expelled breath of a meditation. The waves' approach and retreat follow their own rhythm, alternately inviting and sonorous.


I stand at the edge of two worlds, amphibian, belonging exclusively to neither, penetrating both. I watch as the sun disappears into the horizon and sinks in slow motion to the bottom of the sea, its flames extinguished and its heat cooled until once again it will rise, burning from the water. The sun's heat glows inside my belly, responding to the dying warmth outside me. I am pregnant with light, and each step into the vast, rolling sea pulls me deeper into mystery. My skin melts in the slow rise and fall of waves that carry me further and further into an aquatic world where fishes lift skyward in curls that arc above my head. And like a sea otter, I dive again and again as each approaching wave brings me closer to a world of silence so thick it is deafening. I lose my identity as my body spirals downward and becomes one with a school of baby fish that moves in a dense hypnotic spin of interlocking threads. I rest in the slow monotony of movement for I, too, have gills and can sustain this primeval dance. I am Thetis, sea nymph, taking the shape of that which I desire. Leaving the ring, I shoot upward into air, my tongue steeped in brine.

And just as the sun gives its flames to the sea, the moon pours its milk upon its surface. Moving ribbons of light stretch across an infinite plain where sea and sky are one unbroken whole and fishes swim upside down in the heavens.

I dive again into an explosion of color, am awash in sealight, immersed in a dense population of fish, a curtain of moving shapes that parts to let me through. I feel as though I've swallowed the sun, am transformed into a disc of light. My body undulates and glides. An abrupt twist of my fins and I am propelled in a new direction. I glide through a kaleidoscopic seascape of tiger, leopard and sun fish.

My world is topsy-turvy. Fishes swim in sky and water, and stars line the ocean floor. One particularly radiant star pulls me into its center. I am woven in a nexus of cobalt blue, spinning in a mandala of light and color, a whirling dervish, startling in my intensity. Spinning and alive. Gradually, the velocity of my spins lessens. I must surface and drink the semen rich fluid of the moon, allow its cleansing milk to wash my skin before I swim to shore and rise from the water with dawn.
Posted by MedusaGirl

by Tracy K. Smith
From her collection entitled Duende

Winter is a boa constrictor
Contemplating a goat. Nothing moves,
Save for the river, making its way
Steadily into ice. A state of consternation.

My limbs settle into stony disuse
In this city full of streetlamps
And unimaginable sweets.
I would rather your misuse, your beard

Smelling of some other woman's
Idle afternoons. Lately, the heart of me
Has grown to resemble a cactus
Whose one flower blooms one night only

Under the whitest,
The most disdainful of moons.
Posted by MedusaGirl