The Tornado, Part One 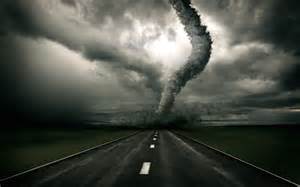 Douglas Adams, in a collection of his short works entitled Salmon of a Doubt, shares one hilarious experience involving his trousers at school that he labeled mind-scarring. I wish I could say I only had one terrible, mind-scarring experience, and I wish it was about something as mundane as clothing. In fact, my entire childhood was a terrible, mind-scarring experience. I don’t even know where to start, but I must start somewhere, as the purpose of writing is to heal these scars once and for all.

I grew up in Kansas. Need I say anything more about the title of this vignette? In fact, need I even write anything more? And, no I never met Dorothy or Toto, though I nearly became Dorothy, and I am convinced this ordeal contributed to the profound mental confusion I experience as an adult. In fact, tornado is exactly what my mind looks like most of the time.

We moved to Kansas when I was seven. When you go to school in Kansas, you not only have fire drills, you have tornado drills, because it is tornado season roughly between March and September (even though they have been known to strike year-round) and because tornadoes can strike anywhere at any time of the day or night and have been known to hit a few schools.


In Kansas, the public siren system is used to alert one to an incoming tornado, and they would even test these the first Wednesday of each month at some hour of the day I cannot remember (because, while I have tried to forget my past, I have only succeeded in forgetting the details).

In Maryland, by the way, the public siren system is used to alert the volunteer fire department of a fire. You can imagine my confusion when I moved here.

I remember it being a beautiful, sunny day in early May with hardly a cloud in the Caribbean blue sky. School was out for the day, it was late afternoon, and I had been playing with my two younger brothers. I also remember my father was out of town, because if he wasn't, this never would have gone down the way it did. Instead, my mother, who is half Italian and fully embraces her emotional heritage and gene pool, was alone with us when the sirens went off.

We had a finished basement, and all of us tore down there with an immediate sense of panic (not helped by my screaming mother) and shock since it had been such a nice day with no visible storm on the horizon. But Kansas storms are like this. Over the years, one learns how to feel a storm coming. There is a certain charge to the air – a certain feel to the temperature and humidity that no amount of bright sun and clear sky can camouflage. The war party is coming.  It is gathering on the plains and by the time it is visible to the naked eye, it will be too late to close the car windows and secure the lawn furniture.

My mother immediately turned on the small, black battery-powered radio with its worn leather casing and silver knobs. The scratchy reception, occasional static and emergency broadcast din made one feel as if Earth had just been attacked by Martians, only adding to the sense of unease. I remember pacing around the basement, waiting for news on the weather and waiting for the sirens to stop, nervously glancing up at the two-foot high windows just below the ceiling and listening for the sound a of a freight train.

Well, the sirens didn’t stop. They went on and on, each wail sending my mother into a more intense round of hysterics. Soon, the radio content turned exclusively to the weather and the impending tornado or, should I say, tornadoes, as there ended up being 26 of them when all was said and done.

Now, we all know how excited meteorologists get, because I doubt there is a person reading this post who has not, at some point, turned on The Weather Channel during hurricane season or even the local news during a snow storm. So, in fairness to my kind mother, the over-excitement of the radio personalities and scouts as they screamed where the next tornado was sited and whether on the ground or in the air, only encouraged her heightened emotional state. Once the words tornado touched down and Johnson County (where we lived) were mentioned in the same sentence, the poor woman was convinced our home was the bulls-eye on the dartboard of doom.

I suppose I could take a moment to describe the finished basement and what we were wearing, but the truth is, I don’t remember much about the room except that it was cluttered and that half of it was a laundry room and the other half a thinly carpeted play-junk area. I have no idea how we were dressed or what anyone even looked like. I do remember we were all huddling on the linoleum floor of the laundry room, when my mother got the bright idea to tie us children together with a large piece of rope and shove us under an ironing board. What good that would have done, I don't know to this day, but as a child living it, I had visions of a large lasso of spinning death.

To be continued ...
Posted by MedusaGirl